This year, unfortunately, I will not be visiting the French Alps. I will miss being on the slopes and being in the mountains, but what I will really miss is the French cuisine! Not only because of the traditional cuisine for which the country is known but also because of the simple but delicious winter sports dishes. Below I take a look at my favorite French cuisine to indulge in when I miss the mountains.

A glimpse into French cuisine
French cuisine is perhaps the most famous in the world. On the one hand, it is known for its haute cuisine with famous chefs and in everyday life, the cuisine de bonne femme is praised: the fresh, simple and honest food that mother puts on the table. Tartiflette only emerged in the 1980s, when French farmers figured out how best to use their reblochon, a cheese typical of France, in a dish. However, Tartiflette was such a resounding success that almost every restaurant in the French Alps has now put it on the menu. A perfect foretaste to get into the French winter sports atmosphere! 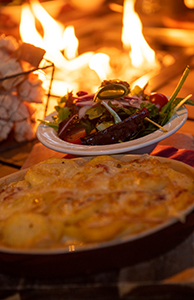 Peel the potatoes, wash and cut them into thin slices. Pre-boil the potato slices in water with salt to taste for 5 minutes and let them drain. Preheat the oven to 200 ° C. Heat the butter in a large frying pan and fry the onion until golden. Add the bacon and cook for another 5 minutes. Then add the potato slices and fry for a few more minutes. Then add the crème fraîche and mix well. Season with freshly ground pepper and garlic. Spoon the potato mixture into an oven dish. Cut the reblochon in half lengthwise and place the two halves, crust side up, on top of the potatoes. Place the dish in the oven and bake the tartiflette for 20-25 minutes, until the cheese has completely melted from the crust. Remove the crusts and let the tartiflette bake for another 10 minutes, until the top has turned a nice golden brown.

Have you tried this before, or have another favorite? Let us know in the comments below! 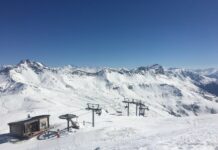 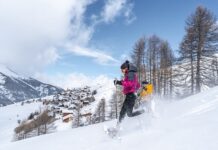